Alternative old-style tarot cards drawing on variant images and themes and ideas from the early history of tarot.

I made the original Pike and Clover playing cards in 2017-18 following a successful Kickstarter campaign. The Pike and Clover playing cards have the same suits and court characters as the standard English-pattern playing cards, but they drawn in the manner of old-style tarot cards (typically the Marseilles tarot). Many people asked me about doing an extended version of this deck with the addition of the 22-card trump suit as well as the 4 knights to make up a 78-card tarot deck. I have now designed and drawn these extra cards to make this tarot deck, called the Rare Triumphs, and it has now been printed.

The cards use the standard playing card suits of clubs, diamonds, hearts, and spades, but drawn in the style of old tarot cards. The pips become real objects rather than abstract stencilled shapes, and the court figures can interact with them, as they often do in cards with the Spanish / Italian suits. The court figures themselves retain some of their characteristics and appearance from the standard English playing card pattern, though they are reimagined and redrawn in the historical tarot style.

You can see some of the cards here: 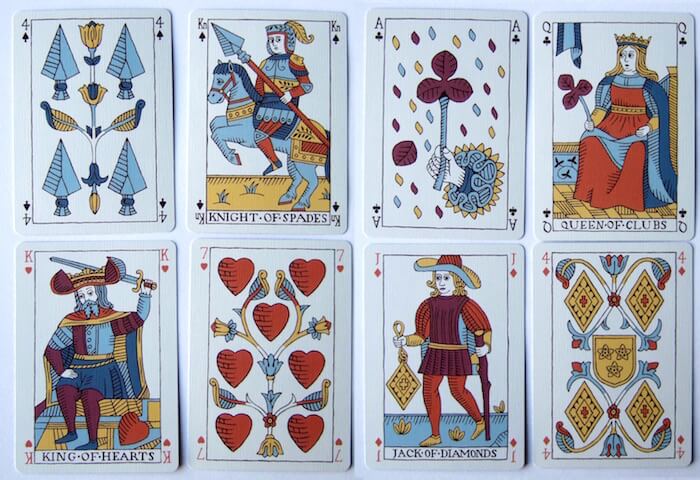 Some of the ordinary suit cards: clubs, diamonds, hearts, spades

The Trump Suit of the Rare Triumphs

The major part of what distinguishes a set of tarot cards from an ordinary set of playing cards is the trump suit. So let's have a look at the trump cards, starting from the top:

Here are the highest two trumps: 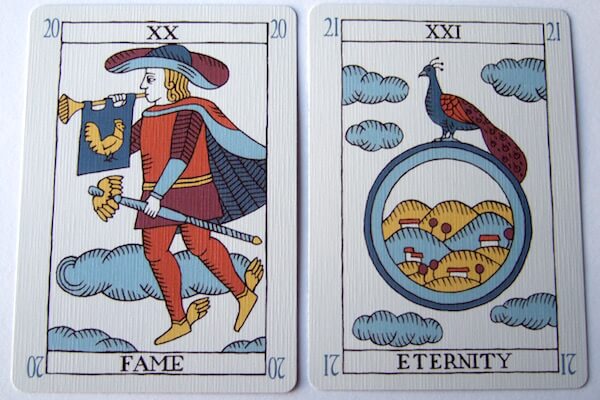 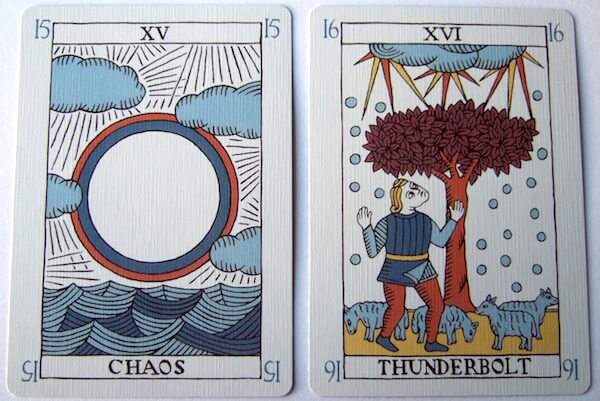 Here are the three virtues:

Onto the middle part of the trump sequence: 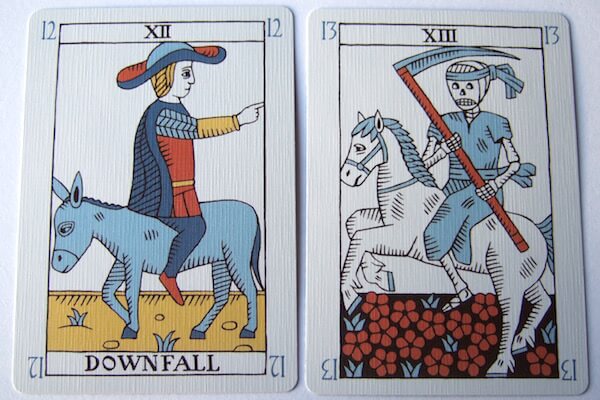 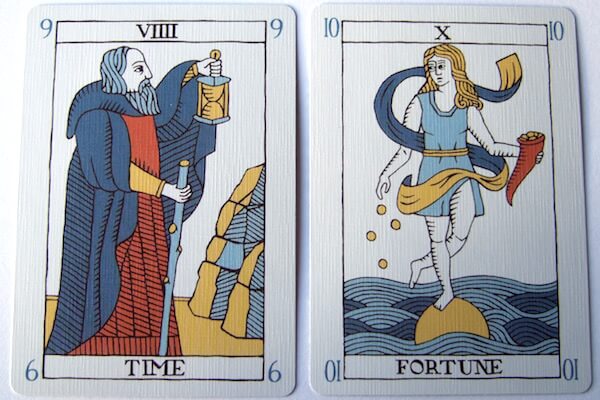 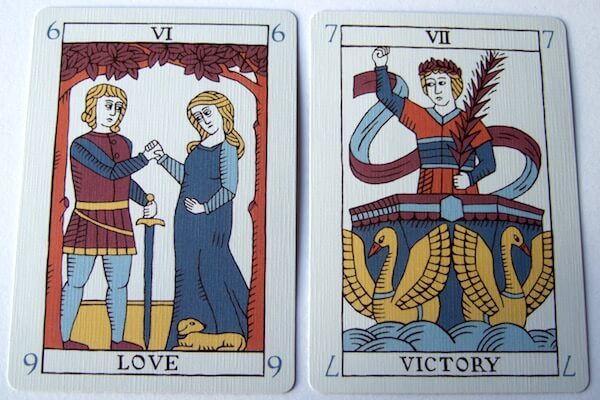 Lowest down, we have the states of man on earth: 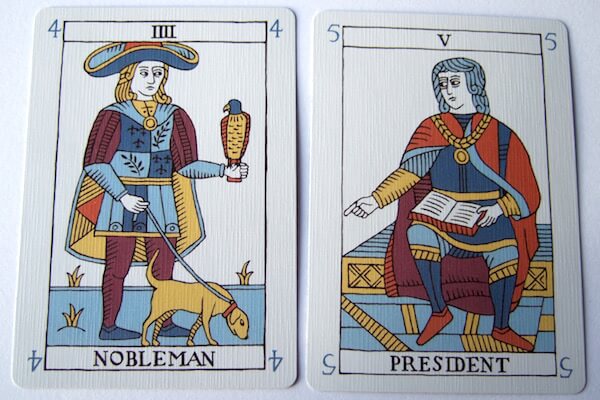 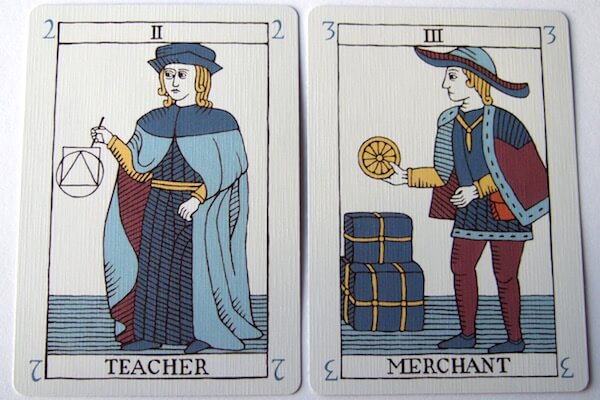 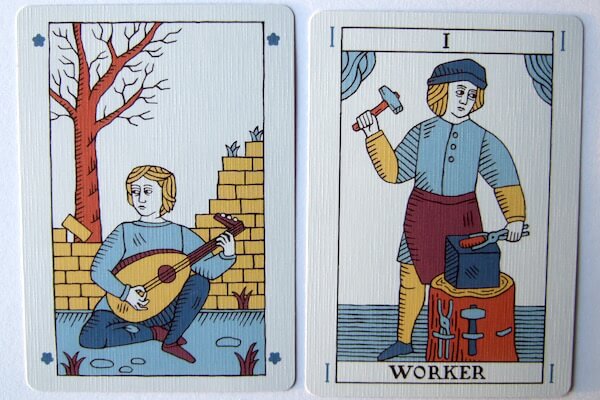 When the game of tarot was invented, the trump suit was added to the ordinary Italian playing cards to create a kind of superpack of cards that could be used for the game. The motifs represented by the cards of the trump suit were chosen to form a sequence of great significance, an allegorical, philosophical, religious sequence about the way we live our lives ... and therein lies much of the fascination with these cards.

The so-called Marseilles tarot became a very widespread and popular interpretation of tarot cards. For the Rare Triumphs trump suit I have essentially followed the Marseilles sequence (as opposed to any of the other similar versions of the sequence that were and are used in the different regions of Italy), not for any particular historical reason, but only because the Marseilles sequence remains common and popular (along with the modern RWS sequence, which is very similar). The change at 2-5, where the states of man on earth appear rather than the more usual Popes and Emperors is particularly inspired by the so-called Mantegna series.

If you'd like to read more about my thinking on the trump sequence, you can do that here.

The trump suit of Rare Triumphs is not a recreation of any particular historical trump suit. In many cases I have used different iconography, different ways of expressing the same motif pictorially, compared to the iconography of the Marseilles tarot. In fact, little of the typical Marseilles iconography can be seen here. But within the wider world of historical tarot, there were often several common (or also less common) ways of representing a given idea. So in many cases I have borrowed from other historical cards alternative ways of drawing the motif shown on a particular card. There are also, you may see, one or two further differences from a typical Marseilles pattern, beyond just the drawings, but still set within the wider tradition of historical tarots.

If you'd like to read more about the historical tarot cards that influenced my artistic work on the Rare Triumphs, you can do that here.

You can see the card back and tuck box designs. 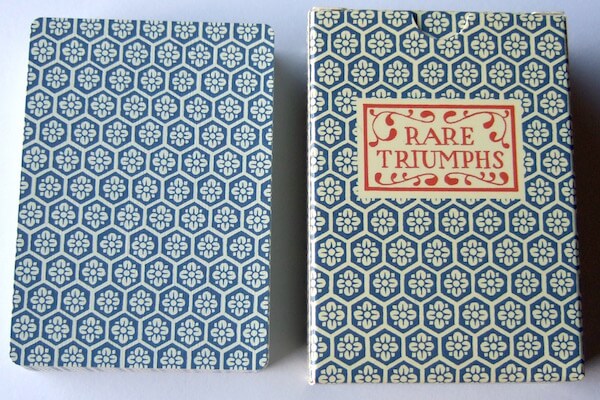 I started the artwork for each of the 78 cards by drawing in ink on paper at about double the print dimensions. I then scanned the drawings, and coloured the images digitally. I used a five-colour palette for the cards. The pip cards use three colours (different for each suit), and the aces, court cards, and trump cards tend to use more, most of them have four or five colours. 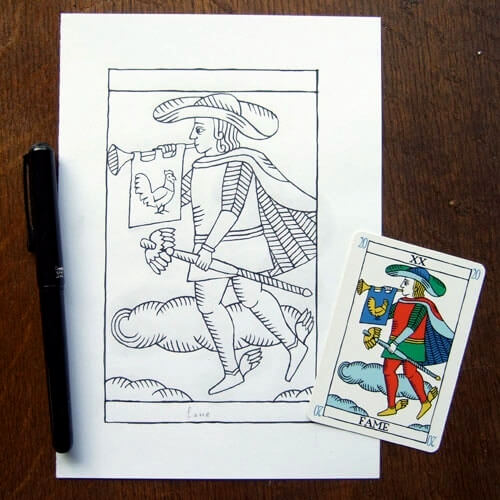 Pen and ink drawing alongside a prototype card (old colours)

You can order the Rare Triumphs tarot cards here.