What Are the Pike and Clover Playing Cards?

Pike and Clover is a deck of playing cards with a style based on the old Tarot de Marseille cards. (Note the pictures on this page show first edition or prototype cards. The second edition cards now available are a little different in some respects, especially in the colour palette.)

With all Spanish/Italian suited playing cards, including Tarot de Marseille cards, the suit symbols tend to be drawn in a more detailed and realistic way than the simple black or red shapes of the French/international suit system. Historically, the symbols we know as clubs, diamonds, hearts, and spades were produced simply and easily by stencilling in a single colour. The Spanish/Italian suits of sticks, coins, cups, and swords tended in contrast to be outlined with a woodcut, followed by colouring by stencilling, often with more than one colour for a single suit symbol.

I wanted this to be a feature of the Pike and Clover cards.

A question then arose as to what the suit symbols of clubs, diamonds, hearts, and spades represent. For two of these, it was instructive to check the names of the suits in French. Clubs are called trefle, meaning clover. Spades are called pique, meaning pike-head or spear-head.

The court cards (Jack, Queen, and King) are drawn in the art style of Tarot de Marseille cards. For some of the cards, you may see an obvious influence from a particular tarot card. More generally, the kings and queens are all seated, and the queens all have their hair uncovered --- these conventions are typical of Tarot de Marseille cards, and are not typical of the old standard French playing card designs, some of which evolved into the standard English pattern. 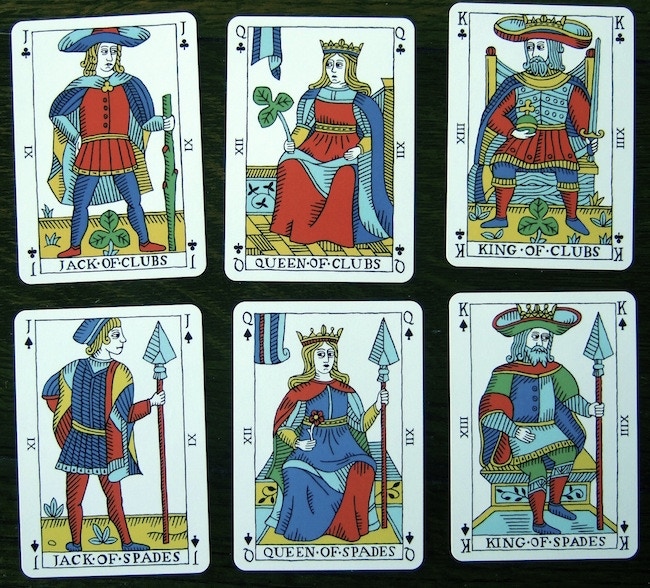 However, fans of the standard English pattern will hopefully find something interesting in the design of the Pike and Clover court cards: they are drawn to incorporate the various conventions and poses that are typical of the court figures. There are one-eyed jacks of hearts and spades. The one-eyed king of diamonds has his axe. And so on. 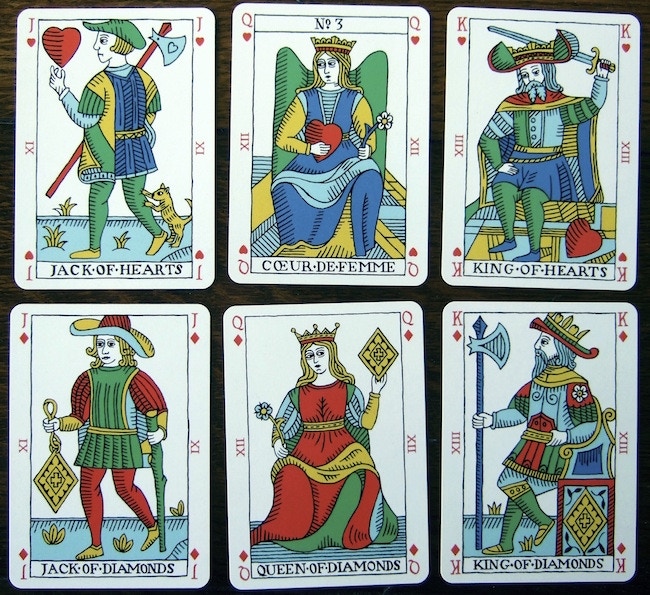 More court cards (in the production cards, QH also has English text and no No. 3)

The pip cards are decorated with flower and leaf patterns typical of the Tarot de Marseille cards.

I have used a five-colour palette for the cards. The pip cards use three colours (different for each suit), and the aces and court cards use four or five. 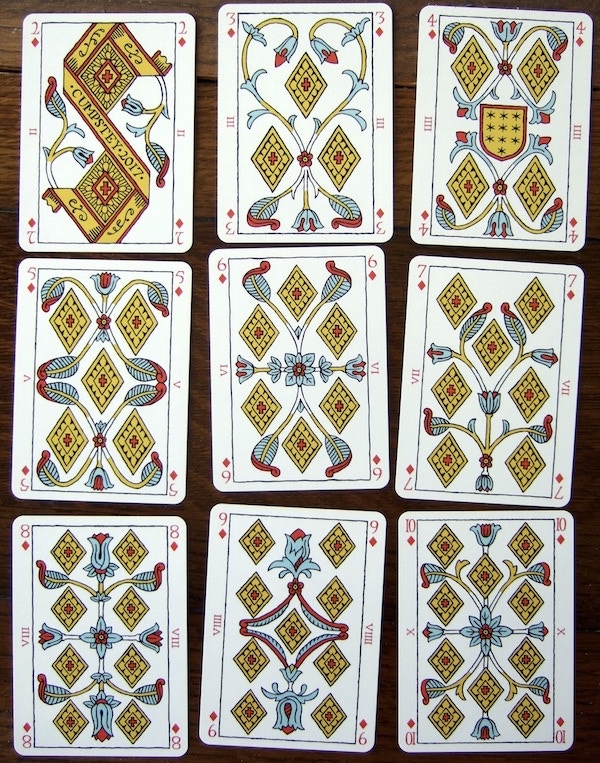 Diamond suit (in the production cards, 2D has updated year, 4D has roses on the shield)

I have also added corner indices to the cards, as well as Roman numerals to the sides. Roman numerals appear on the sides of some Tarot de Marseille pip cards --- note that these are purely additive, so 4 appears as IIII, and 9 as VIIII. 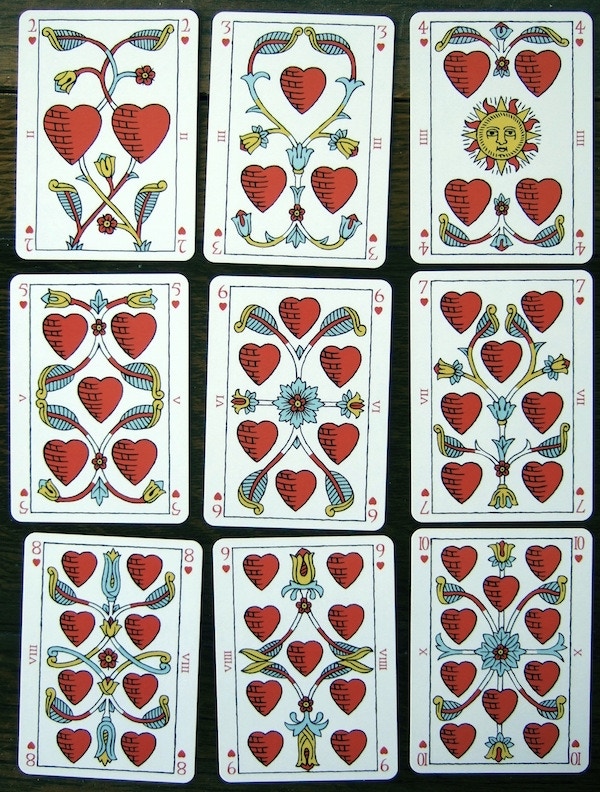 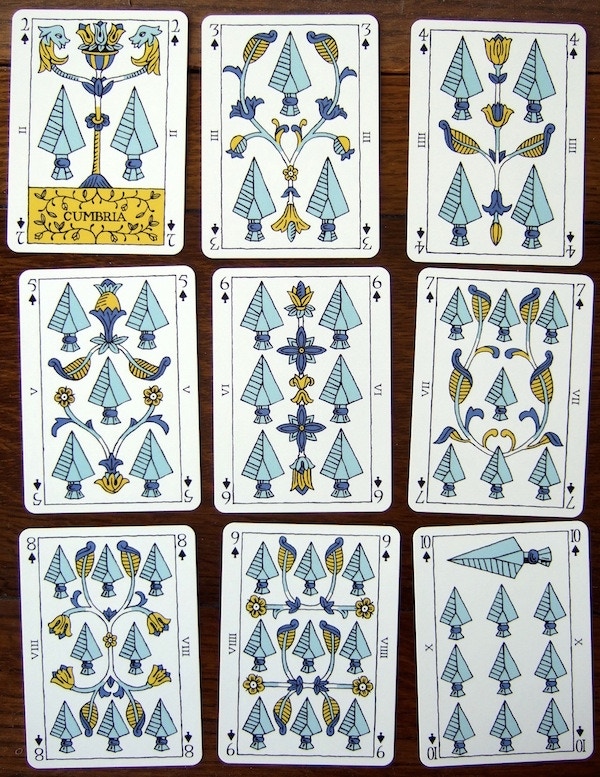 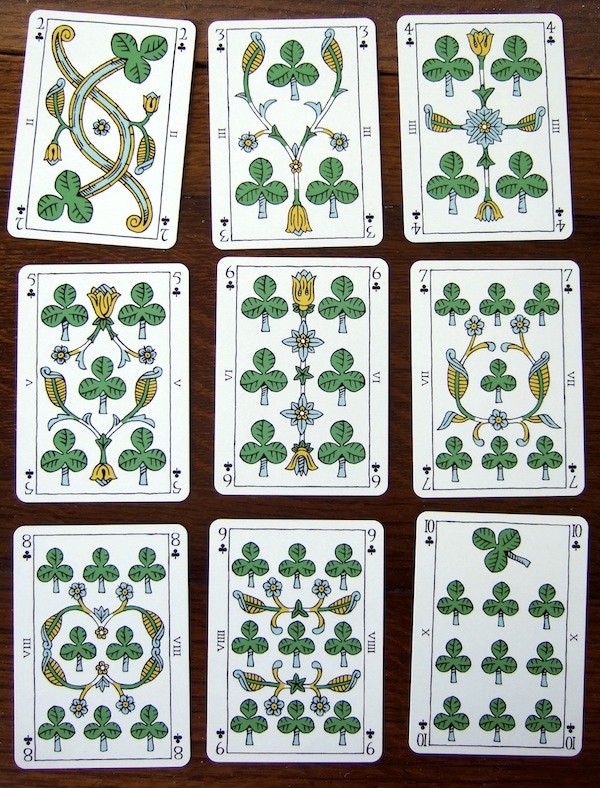 The card back design is based on a classic old-style tarot card back, heavily reimagined ... Early playing cards usually had plain backs. However, this was not the case for tarot cards, whose backs were often decorated with a simple repeating woodcut print pattern. One of these patterns, variations on which were used by a variety of different cardmakers, has a hexagonal motif containing a maltese cross (or similar). The back design I have chosen has a similar combination of four- and six-fold symmetrical elements to create the two-way hexagonal tiled pattern.

The tuck box is decorated with a similar pattern.

Each of the 52 playing cards began with an ink drawing on paper at about double the print dimensions. So even every pip symbol is unique. The drawings were then scanned and coloured digitally. 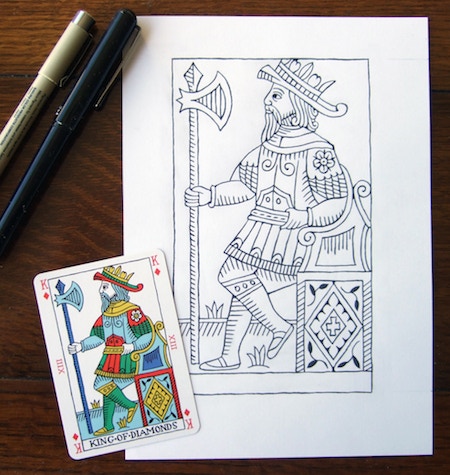 Card together with original drawing

You can order the Pike and Clover playing cards (second edition) here.