The style and appearance of the COMMONERS playing cards are based on the traditional German-suited cards that have been used in parts of Europe for hundreds of years, and are still used today. However, the Commoners cards are drawn with the typical international standard (French) suits ... so keen observers of my previous work will spot that this is in a similar spirit to my Viceroys and Pike and Clover cards. Much of the artwork is also inspired by my local landscape and surroundings in Cumbria in the north of England.

In the German tradition of playing cards, the pips in two of the suits typically grow from a central stem. These are usually the suits of leaves and acorns. In Swiss-suited playing cards the flowers and acorns suits appear like this, and there are plenty of examples from the earliest days of transalpine playing cards with rather experimental suits of different flowers and fruits with the pips growing from a central stem. For my Commoners cards, the spades and clubs suits are drawn in this way.

The hearts and diamonds suits in the Commoners cards are arranged in the manner typical of the German hearts and bells suits. Of course in a typical modern German-suited pack of cards, the suits are shorter: 3s, 4s, 5s, and sometimes 6s are not seen. But that is not the case here. The Commoners playing cards are a full 52-card pack. As is typical, the tens are marked with a large Roman numeral X. 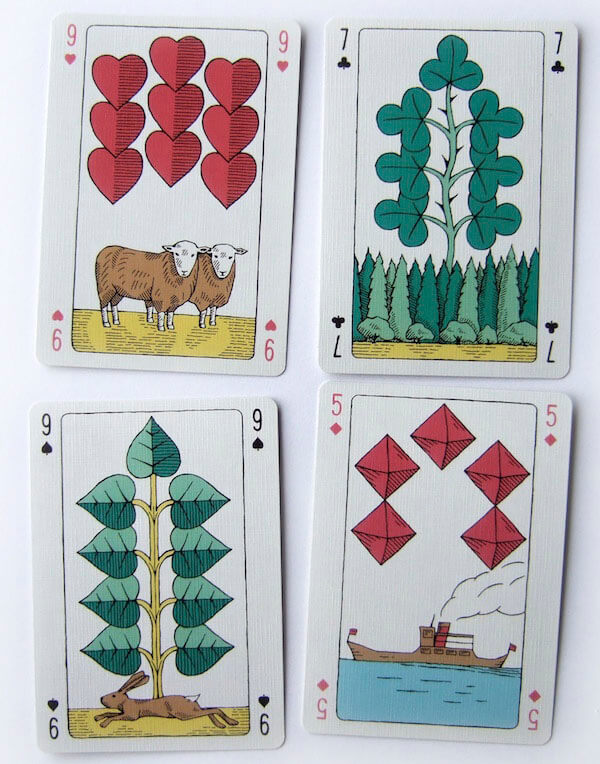 Pip cards with the typical layouts and vignette illustrations

Another major feature that distinguishes cards in this style from the typical plain stencilled style of the so-called international standard is the presence of small illustrations on every card. German style cards follow many regional patterns, and there is a lot of variation across these regional patterns in terms of the subjects of each of these small illustrations. In illustrating the Commoners cards, I have not based my design on any one particular regional pattern, but have drawn a little from many places. Of course the number of subjects needed to fill a 52 card pack is rather longer than any of these (shorter) traditional continental sets of cards.

So every one of the pip cards in the Commoners playing cards has an individual illustration. Each one might be thought of as representing a universal idea .... like a fox, a rooster, a cuckoo, clouds, a mountain, and so on. For some of the drawings, those of you who are familiar with the landscape local to me in Cumbria may spot representations of certain real-life landmarks and features, some more "artistically" represented than others. But the ideas illustrated in the small vignettes should resonate with everyone, whether you recognise the particular mountain, bridge, etc. or not.

All the cards have corner indices (in all four corners) for ease of use.

A big difference between German-style cards and the French-style cards that have become the English and international standard, is that the German-style cards don't have queens, but instead they have two (not necessarily royal) jack-like figures called the ober and unter. In traditional playing card iconography these two are distinguished by the position of the suit pip. On the ober (the higher ranking of the two), the pip is placed high up on the card. On the unter (the lower ranking), the pip is placed low down on the card. I have followed this convention of pip placement in the designs for the Commoners cards, but I have made male and female jacks and queens. 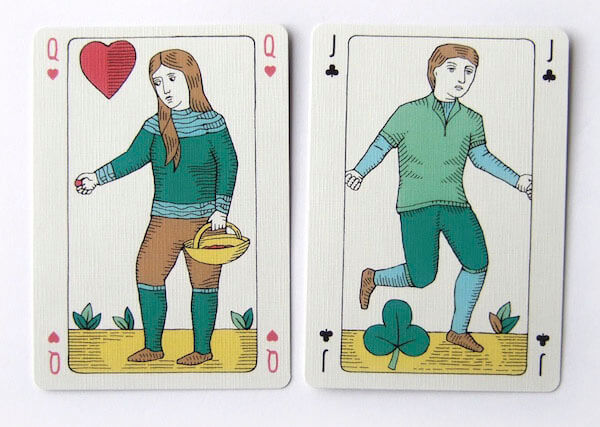 The German kings are all seated, and I have followed this convention as well. But none of the so-called court cards in this set of playing cards are obviously royal figures. Instead, they are commoners in the sense that they are using --- in one way or another --- the common land in the countryside. Such a rural rustic feel is actually typical of many German playing cards. 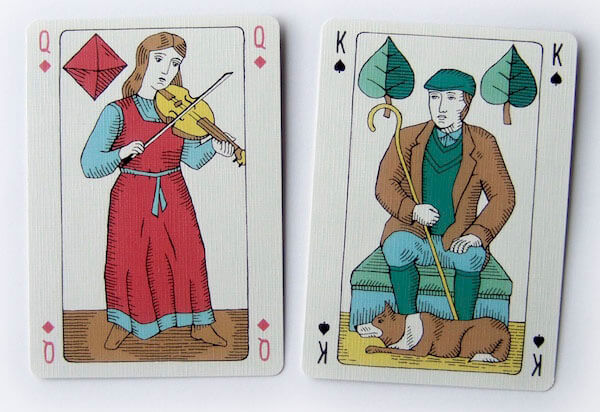 The Aces (and Deuces)

Another big difference with German cards is to do with the aces --- or deuces. One of the earliest changes in German cards was the loss of the 1s (which is to say the aces). Probably this had to do with printing cards onto sheets, and how many cards could fit onto a single sheet of paper. Elsewhere in Europe, the aces became big and fancy (especially the ace of spades in England, ace of clubs in France, or all the aces in Spain and Italy). But for the German-suited cards, there were no aces. So modification, decoration, and fancifying was done instead on the 2s (sometimes called the deuces). Some or all of these deuces were typically decorated with sows, but there were also various other typical illustrations. Of course in the Commoners cards, it was important to have both aces and 2s.

The Jokers, Back, and Box

There are also four bonus cards (jokers / title cards). Here you can see the card back and tuck box. The card back is a true two-way borderless design. 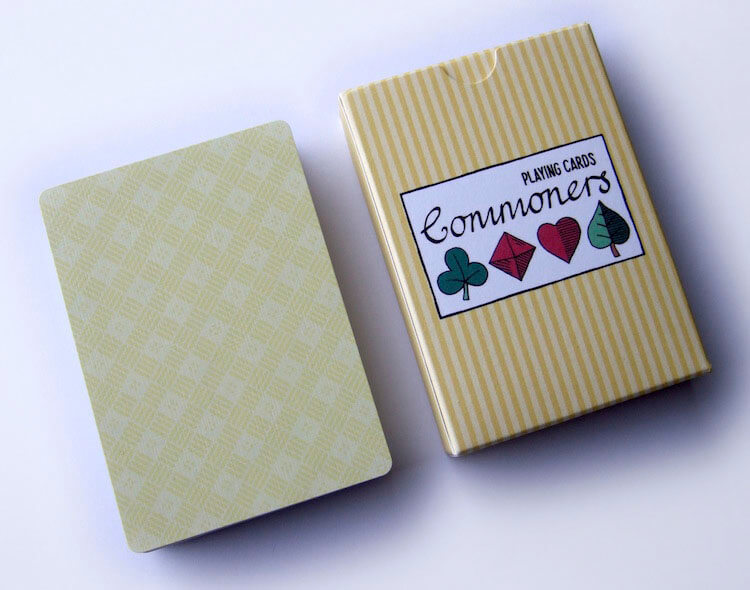 Card back and tuck box

Everything was drawn in ink on paper at approximately double dimensions of the final print. So every part of every card was drawn individually and so is unique (actually the sheep on the tuck box is of course a cut-down version of the drawing below). The artwork was scanned to create a pure black and white image. This was then coloured on the computer using a somewhat subdued and reflective six-colour palette. 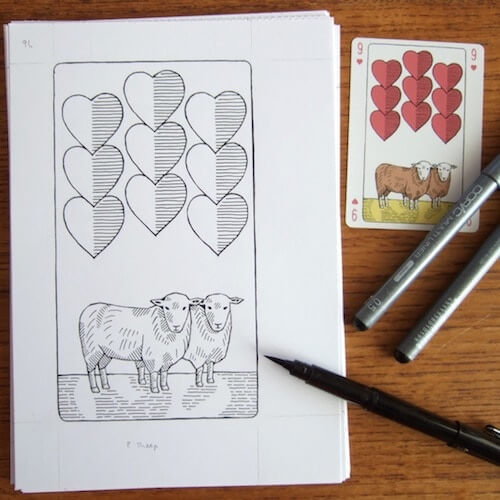 Go here to order a set of the Commoners cards now!