The medieval Scandinavian ballads in this collection tell stories of champions and fighters, vikings, and trolls, drawing on Norse mythology and heroic legend. There are riddles, and there are appearances from Thor, Loki, Sigurd, and other figures from the myths of the Edda and from history. Narrative ballads were part of an oral folk music tradition in Scandinavia, and were first written down around 1600, although the ballads themselves are older. These new English verse translations are mainly based on Swedish tradition.

Thor resorts to cross-dressing in a bid to recover his stolen hammer. The hero Widrick Waylandsson comes face to face with a troll in the forest. A king's daughter is abducted from a convent in rural Sweden. A young fighter has to show off his prowess in skiing and shooting for King Harald Hardrada. And more...

Paperback, 76 pages with 10 illustrations. Published 2014. Note that there is no musical score included in this book.

I am sending these books to UK addresses, £10.00 including P&P

Overseas customers check the options below, or if you really want to buy one of these copies from the first print run direct from me, send me an email the check postage options (see the contact page).

Alternatively, Warrior Lore can be ordered from Amazon (UK|US), or from Book Depository, or from your local bookseller.

Warrior Lore is also available as an ebook through the major suppliers:
Kindle (UK|US) 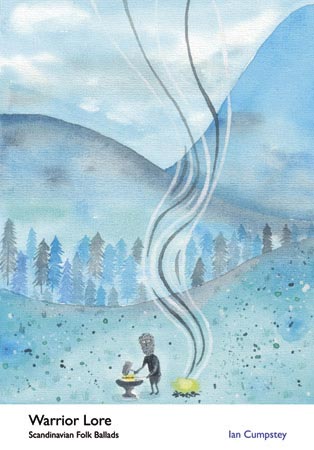