The Saga of Didrik of Bern

The Saga of Didrik of Bern tells the epic story of the legendary King Didrik and his warriors. The saga was probably compiled in Norway based on German poems about Didrik (also known as Dietrich, Thidrek, or Theoderic), and a Swedish version was produced later. Presented here is a translation of the medieval Swedish version of the saga.

Early in the saga, we hear about how the young Didrik assembles a formidable group of warriors, and about their journey to challenge a powerful king. These warriors include Wideke, whose father, Weland the smith, forged his unbeatable sword Mymming, and Heym, who was raised on a stud farm with magnificent black and grey horses. The saga then tells of Didrik's feud with his father's brother Ermentrik, and his long exile at the court of Attilia, King of the Huns.

The saga is driven by human drama, but giants, dwarfs, dragons, and other mythical and magical creatures all appear. Tales of other legendary figures and heroes from northern Europe are interwoven with the story of Didrik: The saga tells about Weland, and the many ways he used his smithing skills, and also tells a version of the story of Sigurd the dragon slayer and the Nyfflings.

Also included in this edition is a prose translation of the medieval Danish poem The Dwarf King Laurin, which tells one more story about Didrik of Bern.

The Saga of Didrik of Bern, with The Dwarf King Laurin,
Translated by Ian Cumpstey

The Saga of Didrik of Bern should be available to order in paperback format through your local bookshop, worldwide. Here are links to buy from Amazon (UK|US). Or from Wordery.

The Saga of Didrik of Bern is also available as an ebook through the major suppliers:
Kindle (UK|US), Kobo, or Apple iBooks. 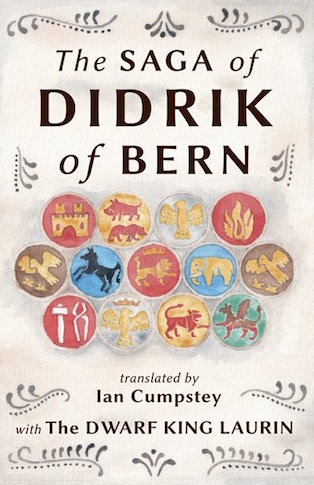