Liber Ludorum is a deck of playing cards created in the insular art style, as seen in gospel books of medieval Ireland and Britain. 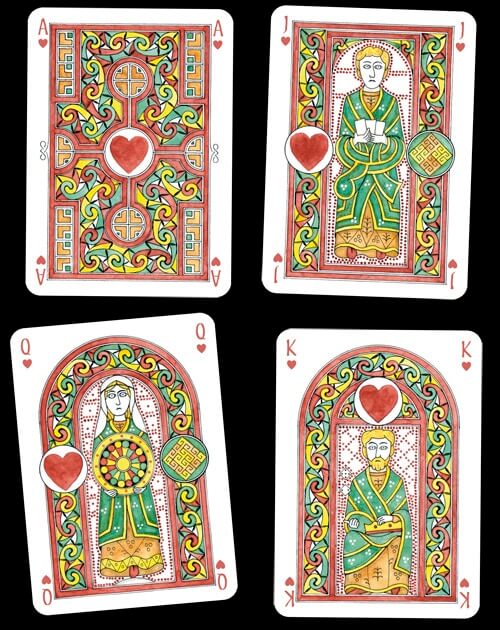 In the scriptoria of monasteries of early medieval Britain and Ireland, breathtakingly beautiful illuminated manuscripts were created. The characteristic decorative patterns, calligraphic texts, and illustrative styles of these manuscripts are easily recognisable, and together make up what is now usually called the insular style. The Lindisfarne Gospels and the Book of Kells are no doubt the most famous of the insular gospel books, but there are also others.

Certain pages in the gospel books were illuminated with wonderful artwork, including detailed patterns of many kinds, and also portraits, usually of the four evangelists. The patterns were often used to make decorative borders, surrounding the portraits or canon tables. They were also used to make ornamented letters and text in so-called incipit pages, highly decorated pages with the first words of each of the gospels. Other pages were filled completely with patterns, and these are now usually called carpet pages.

The Liber Ludorum playing cards are a set of cards drawn in the style of an insular gospel book, with aces resembling the so-called carpet pages, and the court cards inspired by evangelist portraits. 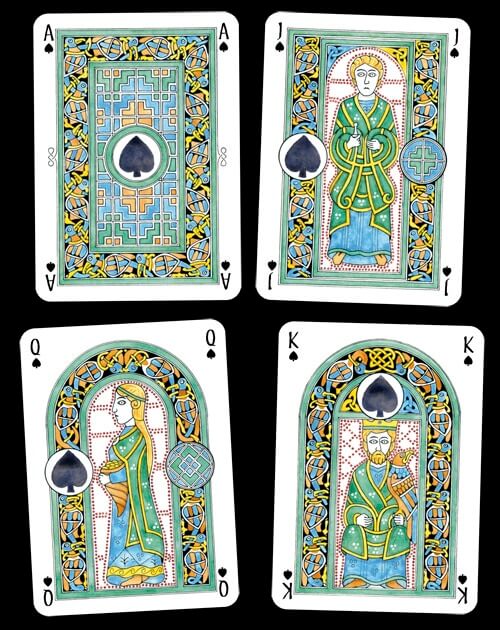 Playing cards arrived in Europe at the end of the late medieval period, rather later than the time when the insular art style flourished. There can be no doubt that creating a set of playing cards would be far from the minds of the insular scribes while they were working on their gospel books. And yet we do have other surviving manuscripts, also illuminated, written by students of the medieval church, filled with thoughts of gaming, playing, changing fortunes and twisting fates, and our earthly existence ...

Many of the court characters in a typical deck of playing cards carry weapons of war (and the evangelists in the gospel books typically carry books filled with the word of God). But the jacks and kings in Liber Ludorum tend mainly to be engaged in play in one way or another, while the queens embody different forms of fate or fortune.

I wanted the court cards to be easily distinguishable from the appearance of the cards alone, without having to rely on indices (which are present nevertheless). So there are three different border shapes for the jacks, queens, and kings. The kings are easily distinguished from the jacks: if nothing else, the kings are sitting down while the jacks are standing ... but maybe you will see other ways as well.

There are four illustrated cards for each suit: the court cards and the ace. The aces are full-card patterns reminiscent of the gospel carpet pages. Each of the suits has its own colour scheme, and each has a dominant pattern. 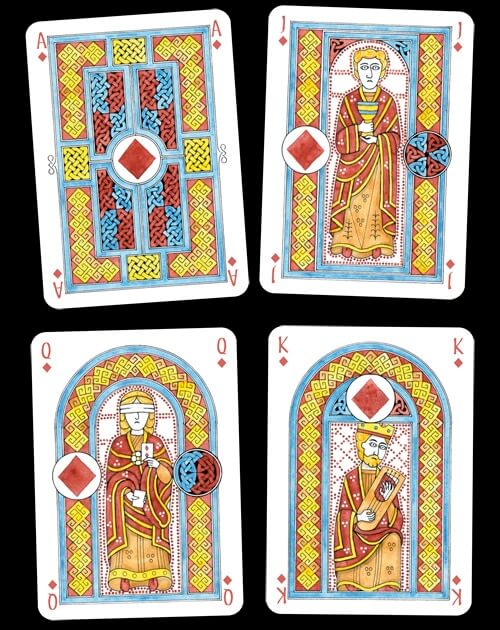 The geometry of patterns is always important, and there is certainly no exception in the patterns of insular art. It has been found that even the most complex carpet pages are based on simple geometric ratios. It was a great challenge to work out scales and proportions that would give a good appearance at playing card dimensions, not trying to squeeze in too much detail, and maintaining a simple measurement ratio that is so characteristic of the insular patterns.

I have used four main patterns: knots, mazes, spirals, and birds, as well as a tiled pattern. The main source for the patterns I used was the Lindisfarne Gospels, though all of them are found in very similar form in other gospel books. 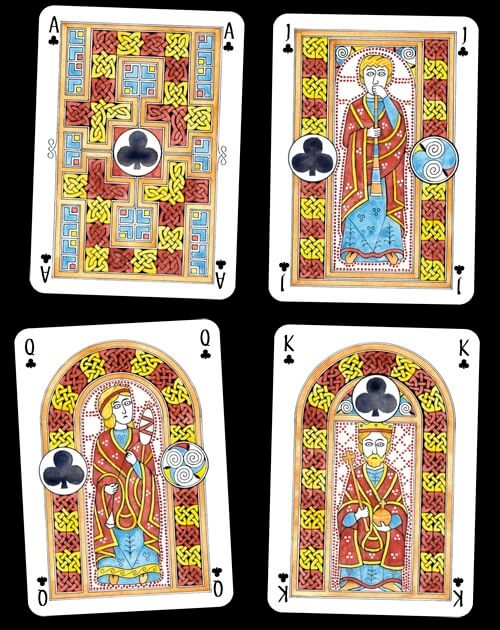 The style of the evangelist portraits in the gospel books varies quite a bit. The Lindisfarne Gospels portraits are less typical, and rather more realistic in style. The Book of Deer (and also the Southampton Psalter) has an extremely abstract portrait style. For the court card portraits in Liber Ludorum, I was inspired especially by the style of the Book of Mulling (and two other manuscripts with very similar styles) and the Mac Durnan Gospels, and also to some extent the St Gall Gospels and the Book of Kells.

Here are a couple of close-up views of the court card designs: 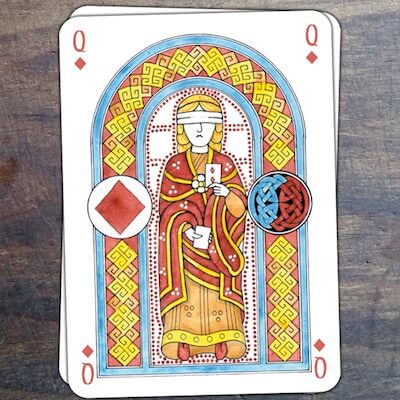 Close-up view of the queen of diamonds design 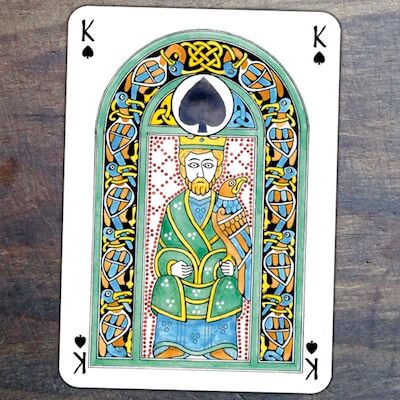 Close-up view of the king of spades design

Of all the decks of playing cards I have made, this is probably the one that comes closest to resembling a typical deck of cards: the pip cards are relatively plain. If you want to think of it in terms of an insular gospel book ... actually the great majority of the pages in all of those books are filled with beautiful but monochrome text. The illustrated pages are relatively rare in the book as a whole. The pip symbols for the cards are all painted in watercolour. 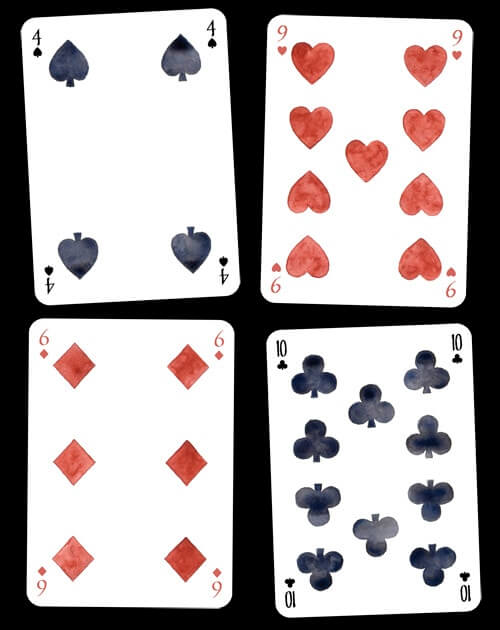 Here's a very brief summary of how I worked. I drew the designs first in ink on paper, working at double the dimensions of the final cards. All the geometric patterns needed to be constructed first using ruler and compasses. The ink-drawn figures and patterned borders were drawn separately, then scanned and combined on the computer. I then printed out the combined black-and-white linework at the same dimensions as the drawings, and added colour (including the red dots and white dots) with watercolour paint. The playing cards are print reproductions of these paintings. 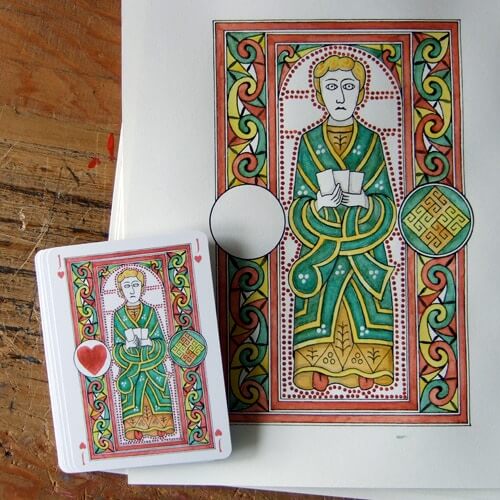 Jack of hearts painting alongside the prototype card 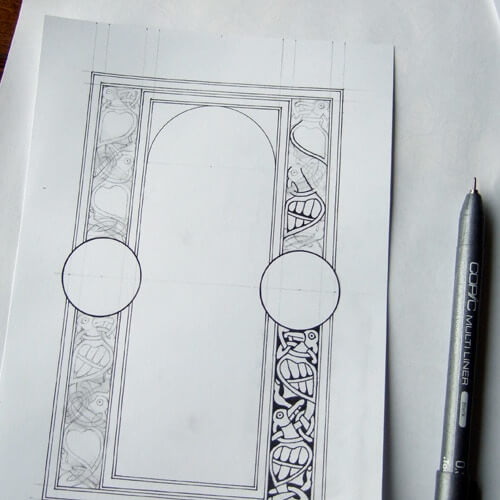 A bird border in progress ...

The card back design is also a full carpet-like design (a true two-way pattern), but still distinguishable from the carpet aces. The cards are supplied in a decorated tuck box. 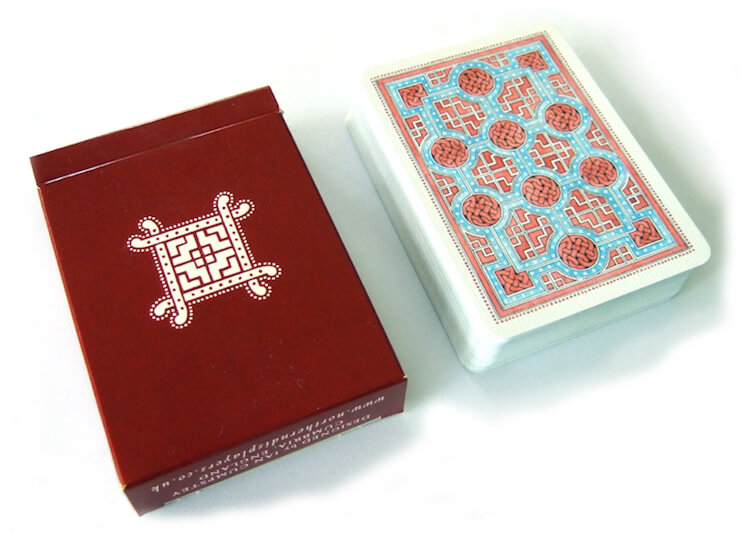 Back of card and tuck box

You may have noticed that several of the insular gospel books I have mentioned above are called the book of something ... (usually actually somewhere or someone). The pack of cards itself has been called a book before, rather infamously. And as this "book" is supposed to be used for the playing of games, that is why I have called these cards the book of games, Liber Ludorum.

Go here to order a set of the Liber Ludorum cards now!