The Great Parade is my interpretation of an early Italian set of tarot cards. The imagery in the art is largely based on the Bolognese tarot (a design dating back to at least ca. 1500, but still used in parts of Italy even today in a more modern form), but I have also been influenced to some extent by other early Italian tarots.

I have aimed to emulate the simple style that is seen in many woodcut cards, and I used only four colours for the painting. I drew the linework for the cards with pen and paper, then printed the designs, and then painted with gouache paints to get the coloured artwork that will be used to print the cards. For this project I also decided to draw everything at the same size as the final printed size.

I want the cards to work as a visual language. So they are text-free, without the names or numbers that appear on many tarot cards. I believe that if you are ready to embrace this idea, you will find yourself able to use these cards at least as well as any others that do have text.

The Great Parade is a full 78 card tarot deck. There are the 22 trump cards (including the fool), plus four suits of pips 1-10 and court cards jack, knight, queen, king. The suits are the usual tarot suits of swords, cups, coins, and clubs.

Here you can see some of the trump cards ... 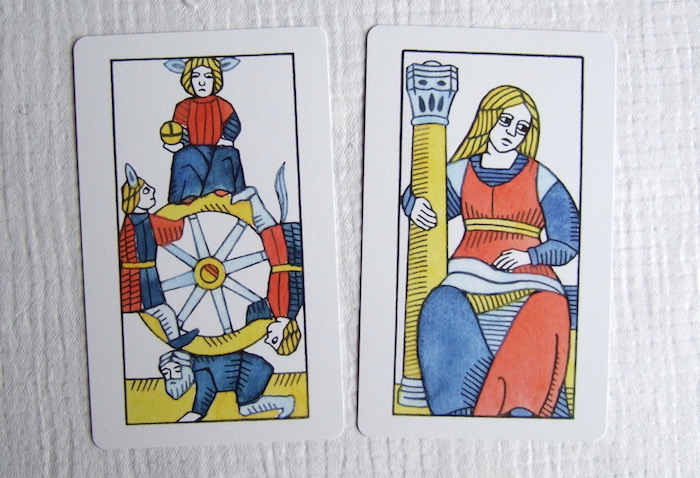 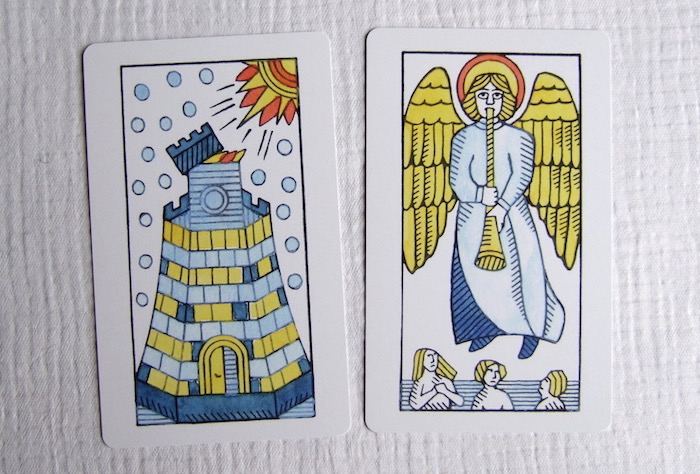 Lightning and the Angel, or Judgement 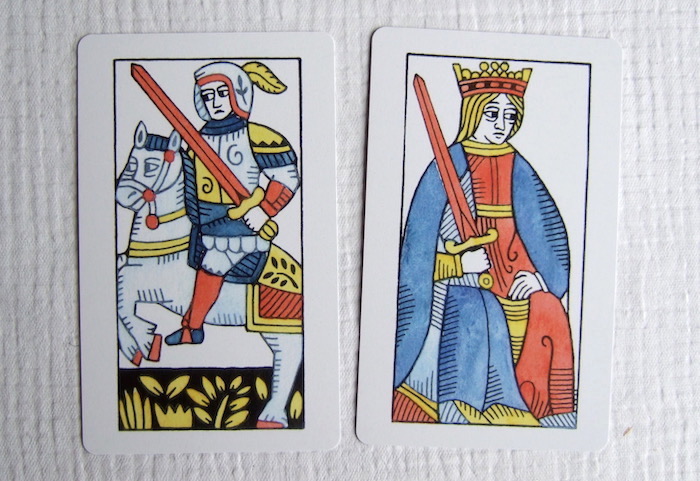 Knight and Queen of swords 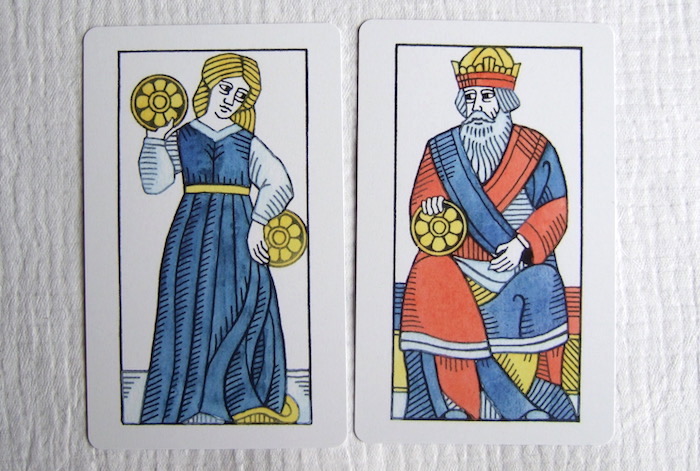 Female Jack and King of coins

The decoration on the pip cards is fairly minimal. One point of interest is on the ace of coins, which has a hare and hound. This hare and hound is seen on the Bologna pattern ace of coins, but it is also seen elsewhere, e.g. on the Rosenwald sheets (and Assisi cards whose design is almost the same). There is even an example of a handmade gilded tarot card, ace of coins, decorated in this style. This card was unfortunately partly destroyed in a Turin library fire, so only half of it now remains. The hare is still there above the coin, the part of the card that would have the hound is burnt away. 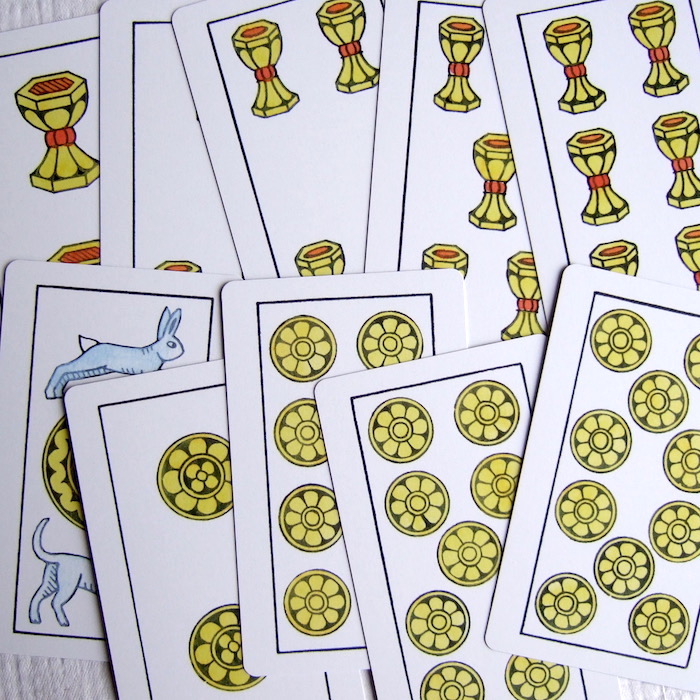 Some of the ordinary suit cards: coins and cups

Some of the ordinary suit cards: swords and clubs

Here you can see the card back (full bleed) and tuck box. 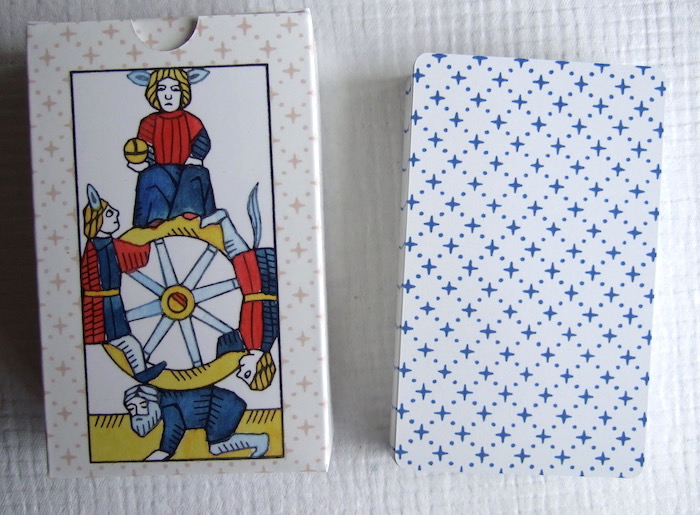 Card back and tuck box

Finally you can see some of the various cards, images, and styles that have influenced what I have done ... the cards in this image are approx to scale with each other. 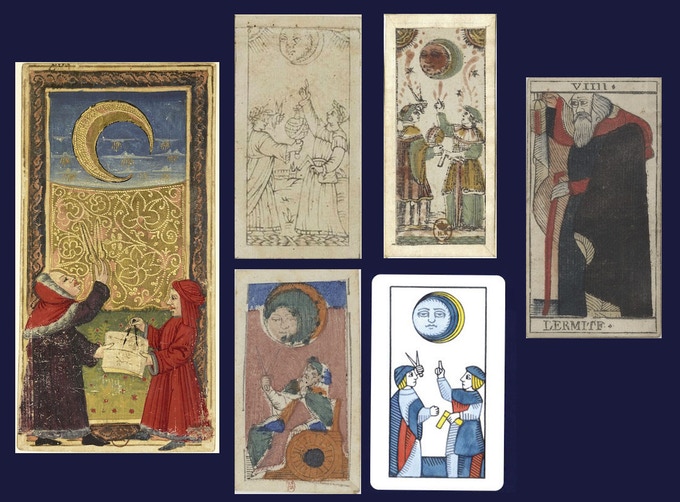 Left is the handmade so-called "Charles VI" moon card (1400s); Top middle left is the moon from the Rothschild Beaux Arts sheets (approx 1500); top middle right is the moon card from the Fine dalla Torre cards, an old nearly complete set of Bologna pattern tarot cards (1600s); bottom middle left is a moon card from the Florentine Minchiate tradition, a different way of drawing astronomers under the moon (a long tradition, this example from 1763, the red background is to indicate a special role of this card in the game); bottom middle right is mine; and right is a French tarot card (an early Marseille pattern card) from Payen, included here for size comparison and to show the particular woodcut style (1713). 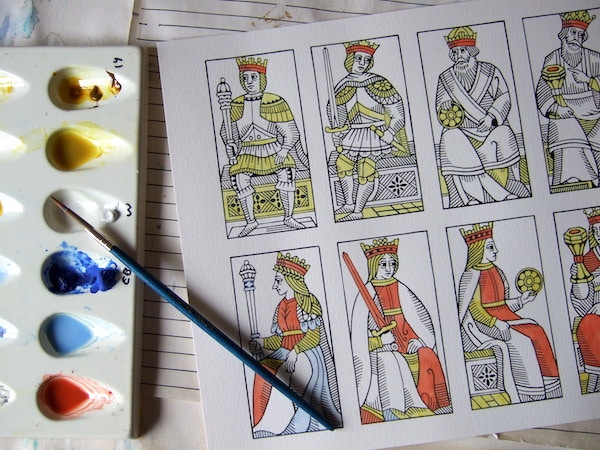 Painting a printed sheet in progress ...

You can order the Great Parade tarot cards here.